Doom 2016 is the first Doom that I’ve played. Therefore, I can’t make any comparisons to other games in the same franchise, and I will treat this game completely fresh. As it was my first Doom, I’ve played the main campaign on the ”Hurt me plenty” difficulty, but I have tried the ”Ultra-violence” and ”Ultra-Nightmare” modes out for a bit. I have completed the main game 100% before making this review and made it to the first prestige on multiplayer. I have NOT tried out the SnapMap feature, a map creator. The review is based on the Steam version of Doom, which is the only version I’ve played. I doubt there is much difference between versions (aside from controlling much better), but do keep it in mind.

Personally I wouldn’t listen to DOOM ost while reading but hey, to each their own so here you go!

How convenient that I recently finished the 2016 version of DOOM just a few weeks before DOOM Eternal releases. It’s almost like I do it on purpose huh. I’m innocent this time though I swear! I actually started playing DOOM after having a conversation with one of my best friends about how we don’t really play modern Triple-A games anymore. It’s not that we dislike them, but they just won’t satisfy us as much as retro games do for various reasons. Then again, I was in the mood to play a recent game that wasn’t Indie, and I was also in the mood to play a shooter. Then it suddenly hit me: I should play DOOM! Not long after I immediately purchased the game, let it install overnight since I forgot how big Triple-A games are, and played it right after. I was excited to play a modern game again, but was DOOM able to deliver? Let’s shoot some demons!
DOOM throws you into the action straight away. After all, there is a gore nest (a demon den pretty much) literally a few metres away from where you wake up. Can’t even take a nice nap before it’s ”Kill demons o’clock” again, poor Doomguy. And the best part is that this functions as the tutorial, except that it doesn’t hold your hand and you can get overtaken quite easily if you don’t know what you’re doing. This ‘’tutorial’’ teaches you straight away the fundamentals of DOOM’s gameplay: keep moving around or else you’re dead, and remember that he’s agile. The best tutorials are done through gameplay and DOOM delivers on that front, and most of the time additional tutorials are done through story or can be quickly viewed from the menu. And boy does Doomguy get versatile over the course of the game. If he wanted to he could probably use a demon as a bike and storm through the entire game, but to keep us entertained he ends up with a good lot of weapons, all of which have additional weapon mods as well to transform them into even more deadly tools of destruction. Later on you can even level-up these mods to enhance their function! But who needs just weapons when you’re Doomguy? Why not stagger some demons and tear them up in the most gruesome ways possible? I’m not exaggerating at all here when I say that playing as Doomguy doesn’t just feel mechanically good; it feels extremely satisfying. And with more perks later on like upgrading your armour and especially runes, you can become the very overpowered, feared enemy of the demons yourself. Runes in particular deserve a mention because you have to finish a challenge first before being able to unlock it, like shooting demons with only a few seconds of mobility after each kill. These are very fun and not just a simple distraction. When I got the Rune that gave me infinite ammo as long as my armour was above a particular threshold, I put the ‘’Siege Mode’’ weapon mod on my Gauss Cannon and literally blasted through enemies without a care in the world. That last part does bring a slight negative to the light however, being that the game can get repetitive near the end slowly. The variation in demons is good but decently small, and they aren’t very smart either. It’s also unfortunate that there are only three boss battles which are all near the end, but at least the bosses are very fun to fight against. And the best part? This is just the action gameplay.

Photo taken a second before disaster.

Since when was DOOM a platform game?
The other gameplay parts of DOOM are platforming and exploration, and they’re quite meaty as well. Between fights with demons, Doomguy can take a breather (not that he needs one) and explore his post-apocalyptic- or industrial surroundings. And there is a great number of secrets to be found in each level, which probably still is an understatement. When I went through the first level, I was proud of myself to have found a collectible and an upgrade, but it turns out that were definitely not the only ones in that level as the end-screen showed me. And just like anything you do in this game, exploration actually rewards you with upgrades to your armour- and weapons. I went back to the first level right after finishing it, and some of these secrets were hidden quite cleverly. And just like the tutorial, it taught me quite well how the game handles secrets, making me more cautious for them in the coming levels. Eventually I got to the point where I got every secret on my first run, but even at that point they were still hidden pretty cleverly. The game challenged me in finding the more hidden ones, and I had fun finding them. Oh, and there is one secret in particular that’s present in every stage that will make fans of the franchise very excited. I wish more was done with them, but it’s a great secret regardless. The platforming in this game is also handled very well, making the exploration even better. This is especially noticeable after you gain access to the double jump in a vertical platforming stage, with a broken bridge at the beginning. Furthermore, combat in the air also feels good as there are many Imps on the broken bridge to test your abilities. I hope that in DOOM Eternal they give us actual challenging platforming sections, because it feels really solid and not once did I dislike a platforming segment. 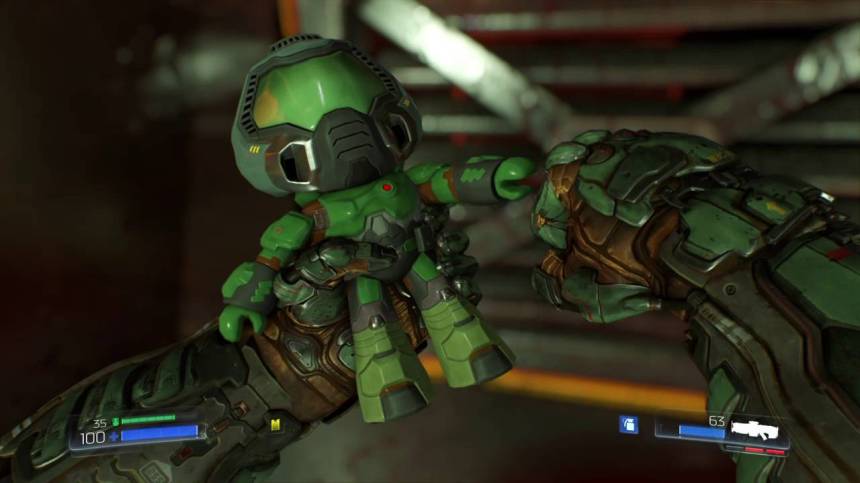 Finding these mini-Doomguys is so satisfying,

Wow that sounds amazing! What more does the game have?
I’m glad you asked! A lot. Let’s start off strong with the main campaign that actually has a total of five difficulties, with two being unlockable after making progress on a lower difficulty. The final one, Ultra-Nightmare, is the real treat here. It’s your regular ”one kill and you’re dead” mode, with the enemies being more powerful as well. I’m not really that person who looks forward to a mode like this because one mistake usually means the end, and I’m known to be very careless, but I did make it through the first stage and half of the second which was tough but fun. These difficulties also carry over in Arcade mode; a mode to score as many points within a no-story mission by racking up kill combo’s, picking up items and some exclusive stuff to the mode. That’s all for single player, but there is enough to be done in multiplayer as well. I don’t usually talk about multiplayer in my reviews since I’m more of a singleplayer/campaign-only gamer, but I tried out the multiplayer for a few hours and did have a legitimate amount of fun with it. That probably comes down to one reason and that’s the multiplayer being less competitive-focused and more casual fun. There’s not really a ranking of what I could notice, neither was there a text chat with toxic people. Just casual doom action in a 7v7 arena, with the added bonus of being able to transform into a demon under certain circumstances. There’s a great amount to unlock as well with the help of challenges you can toggle, or just leveling up. Unfortunately the game is almost four years old now so the multiplayer is not very active anymore, especially not if DOOM Eternal manages to provide a better multiplayer overall. I had the most fun till level 10, but afterwards I got thrown into matches with max prestiged players because there just weren’t a low of low-leveled players anymore. Not really something I can blame the game for; I bet this mode was very much played at release and the years after. Finally there’s a map creator that I didn’t experiment with a lot myself due to a lack of interest and me being anything but creative, but you can play other people their maps online as well.

My first journey into the DOOM franchise has left me very satisfied, and that’s because playing DOOM itself has been made very satisfying. It is such a thrill to become a one-man army, able to slaughter any enemy in your path in the most gruesome of ways. Doomguy controls very well mechanically and has a lot up his arsenal. Eventually it does get slightly repetitive due to the variation in demons not being too big, but there are enough modes next to the main campaign to indulge yourself in. I’m afraid the multiplayer aspect won’t be very active much longer after the release of DOOM Eternal, but there’s still the map creator and arcade mode to mess around with. DOOM is great fun, and it definitely deserves my score of a 9 out of 10!

Thank you for joining me on my journey through the hellish world of DOOM! I definitely had a lot of fun with it, so I’m most likely going to pick up DOOM Eternal and the original DOOM games whenever I get the chance. No idea yet what the next review will be about, but it’s probably going to be about a blue platforming hero who made his debut in 1993.. except it’s not that game, but a remake. What could it possibly be????

Are you going to pick up DOOM Eternal? Let me know down below or reply on my Twitter!

If you buy this game through the Humble Bundle store, you can directly support me! My referral link: