Hey all, welcome to something that I would like to name Game Clash! It’s sort of an extra article to finish up my Super Mario marathon, and I might also use this for future comparisons between games or ports like I did with my review of all Super Mario Bros. ports. This is just for fun and in no way a definitive answer to what game is better since, if you’ve read my reviews, you know that I praise both pretty highly and recommend them to everyone.

Today’s combatants will be some of Mario’s highest appreciated games ever: Super Mario Bros. 3, and Super Mario World. For years, if not decades it has been a debate between fans of the franchise which game is the best classic Mario game out there. For me, there was always a simple answer since there was one game I played far more than the other in my childhood. Regardless, I wanted to give both games an objective look, mix in what I personally prefer and try to come to an answer for myself. Remember, it’s just for fun and there will be a poll at the end for you to vote on!

In Game Clash, I will mostly be comparing the similarities between the games and the strong points each game has to offer. In this comparison, I will be taking a look at:

Without further ado, let’s dive in!

I feel talking about the overworld might be the best place to start, as all following points are sort-of based on it as well. Super Mario Bros. 3 had a world-to-world progression system with its biggest weakness being that you could not revisit old worlds and finished stages, whereas Super Mario World has an interconnected world where levels are infinitely replayable. The inability to replay levels sucks in Super Mario Bros. 3, but you also didn’t need it since stages only had one exit. Super Mario World has more exits that creates branching paths on the overworld, so it makes sense that these levels are able to be played more than once. But the secret exits are both the biggest strength, while also the biggest weakness when it comes to the overworld itself. Super Mario Bros. 3 laid all paths in front of you with branching paths, and you could decide yourself what path you would take. In Super Mario World you had to create these paths and if you didn’t, the adventure will end up being one straight path with no branching levels and no choice to skip the ones you don’t like either. This is not necessarily a bad thing as it gives you the choice, but the overworld technically doesn’t provide much else than the ability to replay levels. If the comparison ended here, I would still prefer Super Mario World‘s overworld over the original simply because it feels more interconnected- yet linear, but there’s one major detail that changes the entire comparison: Super Mario Bros. 3 didn’t just have levels on the overworld. There were hammer bros. to fight, mushroom houses to get 1-ups or power-ups and secret random events. New paths could be opened by crushing blocks, and levels could be skipped when you had the Cloud item. Even though it was an NES game with clear limitations, there was a lot to do on the overworld and being on there was a joy in of itself. Don’t get me wrong, I don’t think Super Mario World‘s overworld is bad at all! I’m just of the opinion that while it took one step forward when it comes to an interconnected world and replayability, it also lost some of the magic Super Mario Bros. 3 had. Still, Super Mario World had a lot of secrets to discover such as the ”Top Secret Area” and new paths were fun to unlock, so I will definitely give it credit for that.

Super Mario Bros. 3 introduced a good amount of power-ups. Before this game we only had the Fire Flower, but now we also got access to three different variations of the Tanooki Leaf and possibly one of Mario’s best offensive power-ups ever: the Hammer Bros. Suit. There was also a shoe that I personally consider more of a stage gimmick than an actual power-up since it was used only once, and the Frog Suit. I know I really dislike the water levels in Super Mario Bros. 3, but at least the power-up itself is good for underwater movement. Super Mario World removed all of these and replaced the Tanooki Leaf with the Cape Feather and in very rare occasions, the Power Balloon. Both games had excellent aerial power-ups, with the cape being arguably broken since it is very easy to remain in the air for the entirety of the stage, while the Tanooki Leaf would lose its aerial effect after a given time. Still, no other offensive-exclusive ability than the Fire Flower is sort of a letdown, but the game makes up for it with Yoshi. I’m hesitant to call Yoshi a ”power-up” since you don’t call your dog a walking tool either, but let’s roll with it for the sake of simplicity. Yoshi itself has the ability to gobble up enemies and function as an extra hit (or jump pad if you’re a sadist) while not being gone after the hit was taken. This is great because for whatever reason, Super Mario World reverts Mario back to mini Mario after one hit instead of normal Mario. Yoshi can also gobble up coloured shells for unique abilities like flying very similarly to the Tanooki Leaf, but also spit out fire. Yoshi is basically the best ”power-up” because when you get hit, you can reclaim it and it also functions as an extra hit that won’t rid you of the power-up you currently have.

The biggest difference between the two games however, is how power-ups are handled. In Super Mario Bros. 3 you had an inventory where you could stock-up quite a lot of power-ups, which you can use before selecting a level. This was a great system because it allowed the player to save power-ups for the more difficult levels. Super Mario World did not continue on this system, which is understandable given the smaller pool of power-ups, the ability to revisit stages and no overworld events. Instead, a new system is introduced which I feel is a worthy replacement: the item box. You can now only keep one power-up stored, but this can be used at any given time in the level. This is a potential life-saver when you’re going through a difficult level, but also something that lets you decide on the fly what power-up to use since you can switch between your current- and stored power-up instantly. I can now blindly go into stages without needing to select what power-up to use in advance. If the level was a cave for example, then I would have lesser use for the Cape Feather and could thus switch it out with a Fire Flower. Both games had their benefits, and I don’t think one system is better than the other. Later games in the New Super Mario Bros. series have created a mixture of both which is obviously the best. I think I slightly prefer the system in Super Mario Bros. 3, but only for the reason that I didn’t have to go back to a particular stage, get the power-up I desire, finish the stage and then go back to the stage I wanted to use it just to potentially lose it. There is the ”Top Secret Area” in Super Mario World to easily gain access to power-ups but as the name implies, it’s secret and there’s no fast travel.

Blue Yoshi is basically the Tanooki Leaf but better

This one is going to be the toughest to answer because while there are differences just like with the overworld and power-ups, the design of both games is pretty much on the same level of quality. If anything, I’d say the main difference between the two is that Super Mario Bros. 3 slightly relies more on stage-specific hazards and gimmicks, while Super Mario World focusses more on good level design that seldom has stage-specific designs. It is also more fun to explore the levels in Super Mario World as the secrets feel more rewardable, and there are secret exits. The levels are longer, have checkpoints and overall just feel a bit better designed than Super Mario Bros. 3. So as you might imagine my preference for this debate goes to Super Mario World, but I don’t want to stop there yet. As much as I praise the level design in Super Mario World, I find the variety in themes lacking. The Ghost Houses are a great addition, but a lot of stages are just caves or plain fields. Super Mario Bros. 3, on the other hand, has eight different themed worlds and levels don’t restrict themselves exclusively to said themes. This is unfortunately something not handled well in the New Super Mario Bros. series, but so many different themes definitely helped in giving Super Mario Bros. 3 an identity. 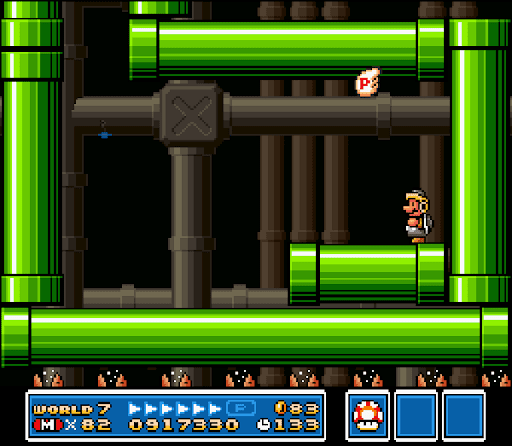 Love it or hate it: the pipe world shows how unique Super Mario Bros. 3’s themes were

This was an interesting comparison to make for me personally, and I hope you enjoyed reading it as well. I love both games pretty much equally, but I was surprised to see how much Super Mario Bros. 3 executed ideas better from my viewpoint and therefore I also think it’s the better game. Fun is most of what matters to me in a game though, and I will admit that I had slightly more fun with Super Mario World due to some advancements that weren’t possible in older games due to limitations. Really though, I will always recommend giving both games a shot, because none is worse than the other. But I am curious since my conclusion is still mixed: Which of the two games do you like the most?